MultiManager is the asset management system that lies at the heart of Multi R IT's ability to provide such high levels of logistics and project management, as well as accurate reporting for its clients.

The system is used to manage the tracking and movement of assets from pre-deployment of new equipment (including staging and image load), through storage and re-deployment of client-owned equipment, to return and disposal of end-of-life assets.

MultiManager has a robust SQL/.Net database that provides for the electronic scanning of asset data to reduce errors, automate certain functions and connect electronically to suppliers and customers.

It has built in audit security such that receipt of each scanned asset is time-stamped, signed and reportable on through each subsequent step. Changes to any record are logged down to the user who made the change and the time it was changed, providing a complete audit history and minimising opportunities for fraud or inaccurate reporting.

A key feature of MultiManager is the extremely flexible report builder allowing it to produce and distribute electronically almost any report that might be required by a customer. Essentially, any field within the system can be included in a report, in any order, and reports can be produced ad-hoc or according to specified times/schedules. 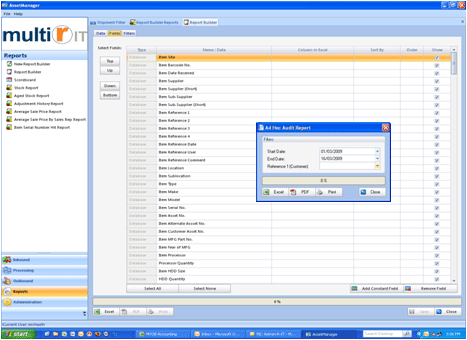 MultiManager has a number of features that allow it to be tailored to specific customer requirements, such as the ability to reconcile returned product against lease schedules, ensuring that finance companies can close off their leases in a timely manner.

In addition, all the information entered into MultiManager during the course of a product refresh project can be reported back to a customer in the most appropriate format and time, including both product delivered and product removed.

Full details of end-of-life product, such as specification and condition (upon which market pricing is based), is captured during the audit process and can be reported on.